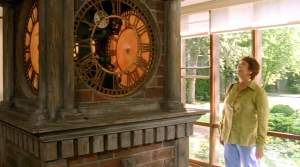 Maddy is visiting her publisher Antonia Stangerson with her agent, Barry Opper. Antonia collects clocks, but her husband Norman is a tempraphobic, a man who has a fear of the passing of time. Clocks are a constant reminder that time is passing, and will never return.

Antonia tells Maddy that they are thrilled with her manuscript. A book about Jonathan Creek could revitalise the true crime book market. She shows Maddy a few ideas for the front cover of the book. One depicts a scantily clad handsome white man with a woman draped over him. Another shows a handsome coloured man in similar attire, with the token woman. Antonia seems a little taken aback to discover that there actually is a real Jonathan Creek, "suddenly he seems less believable" she says.

Meanwhile Jonathan's accountant is at the windmill going over his accounts. She is a sweet young woman who is clearly attracted to Jonathan. While Maddy moans to Barry about how her relationship with Jonathan isn't going anywhere, but how she no longer feels single. They are therefore denying themselves sex with other partners, not that she minds of course, oh no, it's just that it isn't fair on Jonathan. 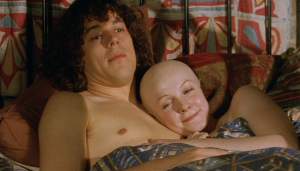 Back at Jonathan's windmill he is no longer "saving himself" with his accountant on his living room table. Although he receives a surprise the following morning, when it's revealed that she'd bald, and wears a wig.

Back the Stangerson household, Antonia is chopping a chilli and accidentally get some in her eye. Rushing to the sink to rinse it out she fails to notice a man in the doorway. We then see Norman Stangerson enter the house to find his wife supposedly crying and a man standing next to her. His name is Lewis, and he is returning Norman's wallet as he dropped it in his branch of Wimpy. Norman questions how the wallet arrived there, and is surprised to here that Lewis saw him in the Wimpy yesterday. He even witnessed Norman spill a cup of coffee over his foot whilst sitting down at a table in the window! Antonia doesn't know who to believe, for Norman swears blind that he was in America yesterday! And for some reason Lewis is very convincing.

Antonia then phones the American company that Norman went to see for the week. They confirm Norman's story, saying he was in Manhattan all week, leaving Antonia even more confused. To add to her problems, she notices a scaled mark on Norman's foot as they are going to bed. Norman explains this away by blaming the hotel shower.

The following day Antonia relates the story to Maddy. It all sounds impossible, how could a man leave Manhattan, fly back to the UK to buy a hamburger and then fly back to the states for a morning meeting all in the space of seven hours? Maddy find out that Antonia and Norman have only been married for eighteen months, and both are only children, so it couldn't have been a twin.

While Antonia prepares lunch, Maddy goes up and has a look in Norman's bedroom. Finally tipping out the dirty washing basket and smelling socks. Sadly she fails to notice Norman is watching her whilst he is having a bath! He tells her once again that Lewis's story is a load of rubbish. He questions if someone has been impersonating him for some reason.

As they sit down to lunch Maddy has a look through the wallet that Lewis found in the Wimpy bar where he worked. She finds a business card for a company that Norman used to run with his partner Mel Porthropp before the recession came and they had to close. It was a computer graphic design business which ran for nine years, but sadly Norman has lost contact with Mel. Maddy then discovers a piece of paper upon which is written:- 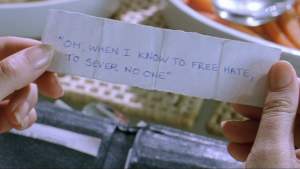 "Oh when I know to free hate, to sever no one"

She's stumped, so she takes it to Jonathan. While driving to Maddy's flat Jonathan spies a mannequin in a shop window, she's bald, making Jonathan's mind wonder! Back at Maddy's flat Jonathan tells Maddy of his affair with his VAT inspector, she gets slightly shirty, and becomes defensive when Jonathan points it out. He tries to explain that it meant nothing, but is now having problems dumping her. He doesn't want her to think it's because she's bald. Needless to say he gets no sympathy from Maddy, and leaves arranging to meet her outside the Wimpy where Norman is alleged to have been seen in, at 8am the following day.

At 10.20am Maddy roles up and they go in. They speak to Lewis, who is suddenly not so sure that it was Norman he saw. This sudden reversal sets Maddy wondering if someone has got to Lewis. Meanwhile Jonathan notices a poster on the wall. It's a special promotion for a free wall poster on football when you collect so many tokens. Maddy then joins him while he is showing a picture to two ladies behind the counter. They are adamant that it is Norman (or in their case, "the guy who spilt the coffee"!). "Interesting" Jonathan replies, "this is a photo of Newt Gingrich, the speaker in the house of representatives." He then shows them a picture of Norman, and they suddenly change their minds. Oh yes he was here as well...they say!

As they leave, Jonathan gives both pictures to Maddy and says this proves his point. It could have been anyone in that Wimpy. Maddy is still suspicious due to Lewis's sudden turn around. She then spies a homeless man across the road who seems to have a permanent pitch in a doorway. Luckily with some food from the Wimpy he remembers seeing Norman. He tells them that they don't have to take his word for it. A surveyor was here taking pictures, but people kept getting in the way and ruining his shot. The homeless man swears Norman was one of them.

At Antonia's house, Maddy shows her some pictures of Norman outside the Wimpy. The surveyor was in no doubt that he took the pictures between nine-thirty and ten, firmly placing Norman in the UK and not in the States.

Maddy then does some phoning around to try and find some holes in Norman's story in the States. Late at night she phones Jonathan in the hopes of disturbing him and Rebecca (the VAT inspector). Alas Rebecca isn't there, so she starts to gloat that she has a man coming round for dinner. She then tells Jonathan that she has been unable to find a flaw in Norman's story at the USA end. Norman had a meeting which broke up at around 1.30am (USA time) and he was in the office at 9am seven and a half hours later. Jonathan, however, is not convinced, "What," he says, "if Norman was planning to kill his wife...". It would be a great alibi, but what if something went wrong while he was back in the UK, and he has to scrap his plans.

Meanwhile Norman is shown the photos, and he can't believe them. Antonia is torn, she doesn't know what to believe.

Maddy then once again phones Jonathan late at night, this time getting him out of bed. She then says things like, "Oh go on, take me!" Jonathan soon twigs that she's talking about a chess game, and advises her to resign! (This is a brilliant scene - as are most of the ones where Maddy is trying to make Jonathan jealous!). She tells him the one trail they haven't followed up on is Norman's old business partner, Mel. She's not sure where to find him, but there can't be too many Mel Porthropp's in the phone book, and they agree to meet the following day. 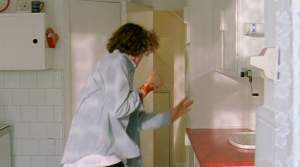 The next day, Maddy and Jonathan, pay a visit to Mr. Porthropp. Sadly Jonathan has drawn the short straw and has to look around his house while Maddy keeps Mel Occupied. Jonathan encounters a dog which seems to think he's food! To top it all off, it soon becomes clear that it isn't even Mel's house! The day is wasted, and while driving back home Jonathan receives a call from Rebecca. He agrees to meet her parents on Wednesday!

While Rebecca is showing Jonathan some photographs of cows (her parents live on a farm), she mentions something that sets Jonathan thinking. Her parents are out celebrating their anniversary. Her father remembers the date (5 July) because the day before is American Independence day, and was his last day of independence, literally! Jonathan begins to understand.

Back at Maddy's flat, Maddy is trying to understand the cryptic message she found in Norman's wallet. Jonathan explains, that it's only so hard, because it's so obvious. The one thing Jonathan never did was read it out loud. It turns out to be a phone number, phonetically written down. Maddy goes to phone Antonia, but she rings Maddy first. Her husband has been killed in a firework accident during his latest trip abroad on business.

Maddy and Jonathan go round to Antonia's to tell her they have figured it all out. If we're not looking for one man with two identities, what about two men with the same identity. Someone arrives at the door, and Norman walks in a hugs his wife. He's not dead after all. 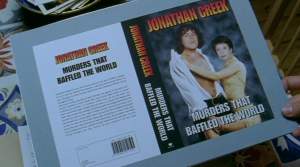 When Norman and Mel went bust, it was hard for both of them to get a job. Norman was lucky to get his job, whereas Mel couldn't even get arrested! But, then they decided they could work together, Norman could work the UK end, and Mel could pretend to be him in New York. The up shot of which was that Norman could get more time. Norman met up with an old flame, Gillian, before he met Antonia. Then when he married Antonia, he found he couldn't give up Gillian. So while Mel was in the States, Norman was with Gillian and her son. That was the reason he ordered a hamburger in the Wimpy, even though he didn't eat meat. He wanted it for the token for the football poster, so he could give it to Gillian's son.

Maddy and Jonathan then pop back to her flat, where he tells her that he has split from Rebecca. "It all ended very amicably when her father propelled me out the front door on a waitress trolley!". He then spies the graphic mock up of Maddy's forth coming book. It depicts Jonathan with his shirt open with Maddy draped around him. He is not impressed, and when she protests saying she hasn't approved it, he finds a letter, "thank you for giving your approval for the enclosed..." it says.

Maddy then points out that Jonathan has missed the last train home. "We both know what this means don't we?" she purrs. "Do we?" he answers. "Six hour wait at that sodding station...oh well, find yourself a nice bench, try not to sit in any vomit, it'll soon go...." she replies!