Who is Jonathan Creek? 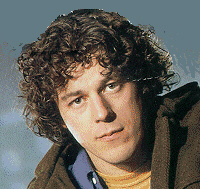 Jonathan Creek is an extremely intelligent man who can wrap his mind around problems, and solve them in a few hours. As such he has found an ideal profession, designing illusions for magician Adam Klaus. And he comes in most useful when playing logic games (see No Trace of Tracy).

Although Jonathan is a fairly quiet man, he will voice his opinion and won't be taken for granted by anyone. Although he will listen to people he will quickly dismiss ideas which he knows to be wrong. Thus to some people he can seem like "he's always right". As such he is open to people who want to take him down a peg or two, especially Maddy. He is therefore always on his toes and won't let the wool be pulled over his eyes easily (see The Reconstituted Corpse).

Jonathan leads a fairly orderly life, and at first didn't like Maddy bringing chaos into his neat little world. He was seen voicing his opinion on the fact in Jack in the Box. However it would seem that a gap in his life has now been filled, and he has started to enjoy himself solving crimes. He has a hobby as it were, which he can pursue in his off hours. We can also see Jonathan take credit for the things he does. Something which he would appear to like, as Adam takes most of the credit for his illusions. Although having said that Jonathan does not crave the limelight, and is thus happy to take a back seat to Maddy, who takes the main credit, but does at least mention Jonathan in her work.

Jonathan isn't the best looking man in the world by any means, but he is immensely attractive to the opposite sex. Something which while he likes it, he isn't always sure what to do about it. What he lacks in looks (which aren't half bad!) he makes up for in personality. He likes to make jokes, and see people smile. However he sometimes does find it a chore to always be entertaining. An example of this was when he first has lunch with Maddy, he knows even before they start that she will want to see a trick of some sort. Which he does provide, some what grudgingly.

He takes great pride in his work, and strives for perfection. He hates people who try and belittle what he does. For example saying he can't have a life if all he does is invent tricks. There is always a feeling that Jonathan is under-valued.

The five best words that describe him are:- 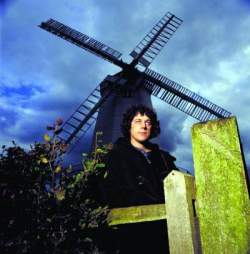 Jonathan outside his windmill 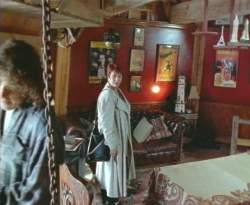 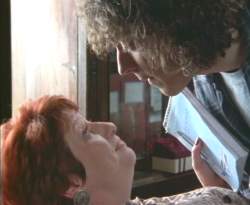 Jonathan lives in a Windmill in the middle of no-where, but which has a train station nearby. While the house is fairly tidy, it can be described as an organised mess, with old magic tricks and models scattered around. We have only seen his living room, and the kitchen, the bedroom has only been shown briefly when Jonathan walked across it naked!

He has a number of posters scattered around the living room upstairs showing famous illusionists. There are also a number of book cases which house cuttings and information on illusions of all types, such as "disappearance with re-appearance elsewhere". His kitchen is a typical bachelor one, with washing up in the sink, and a bin full of mainly TV dinners. Although he is a sensible eater, and is careful about what he eats.

Although Jonathan is extremely attractive to the opposite sex, it would appear he has had little experience with them. Or maybe those that he has had were bad ones, putting him off the idea of women. He is quite an up front person and will ask where he stands before anything goes any further (as seen in The Wrestler's Tomb when he first goes to lunch with Maddy.)

He has slept with Maddy, once, as well as kissed her a number of times, but always he seems to "say something" or "do something" that annoyed her, so it never really went very far. Other women have tried to seduce him, such as Christine in Miracle in Crooked Lane. But Jonathan waited and eventually slept with Maddy (see Miracle in Crooked Lane), although it happened just the once.

Jonathan has dated other women, namely Fay Raynor (see Mother Redcap), his accountant! and Carla Borrego. With Carla it did seem like he had finally found someone that could become his new sparing partner after Maddy left, going so far as to meet her parents, but yet another misunderstanding prevented the relationship from going further. Carla is now married to another man and Jonathan is once again single.

In some respects Jonathan looked down on Maddy. As he is her intellectual superior, he is some what amused at her feeble attempts at trying to make him jealous (as in The Reconstituted Corpse), or her numerous attempts to solve the crimes they'd be investigating, usually coming up with completely the wrong explanation.

However his lack of experience with women for what ever reason made his relationship with Maddy a stormy one. He never quite knows where he stands, and can be found kissing her one minute and facing verbal abuse the next. He finds Maddy a mystery, which again may have added to her appeal. She was a puzzle to solve, which fascinated him.

At times it is almost like he is looking at Maddy from a higher plane, simply watching her at work. Maddy takes far more chances in a week than Jonathan would ever do in his life! On some level he admires Maddy for this, and wishes he was more like her in that respect. On another he simply can't believe what she gets away with sometimes, talking her way into people's lives simply for a story. She also has a way of talking people round and making them feel guilty even though she is the one clearly in the wrong.

She was unlike any woman he had ever come across before. He cared for her, and loved the way she got jealous if he was with another woman. They did kissed a number of times, and even slept together at one point, but nothing ever came of the relationship.

As Maddy is now in America, it's unlikely the relationship will start up again.

Jonathan met Carla when she was an agent for a magician who was performing on Adam's show. Carla is an ambitious woman who had little time for Jonathan to start with, but like Maddy soon found his particular talents useful. They did start to have a relationship - probably along the lines of the Maddy/Jonathan one, however a misunderstanding (he hiccupped and Carla mis heard what he said about her father!) caused Carla to call off the relationship and she promptly married Brendan, a TV producer who gave her her own TV show.

Jonathan works with Carla on the show which is like a rival to Crimewatch, and called Eyes and Ears.

They now have a some what awkward relationship as Carla wonders what it would be like if she hadn't mis heard Jonathan. They tend to have numerous moments alone together, but nothing ever comes of them, as Jonathan isn't the type to have an affair with a married woman.

Jonathan basically thinks Adam is a prat. However as he doesn't want to perform the illusions he invents, and he needs the money, so he puts up with him. Jonathan sees Adam as a very over the top person, and sometimes can't stand the way he performs his illusions. Bringing down his family entertainment show to the level of a "bank commercial"!

There is no real love lost between either of them, and they rarely if at all meet outside of the theatre where Adam is performing. Jonathan sees Adam as a man driven by his lust for women, and has seen Adam change partners more often than he's had hot dinners. Jonathan is amazed at what Adam can get away with. Delivering some corny chat up lines, and seeing women actually fall for them!

Having said that we have seen Jonathan talk to Adam about his love life and Adam does seem to know bits and pieces about Jonathan. This implies that there is something more than just a business relationship, and true (if un-balanced!) friendship exists. Perhaps Jonathan lives some of his life through Adam, as he's too shy to perform the tricks himself?